INTRODUCTION: In March 1814, the enemies of Napoleon entered his capital with triumph. The overthrow of Napoleon brought with it one of the most complicated and difficult problems over presented to statement s and diplomats. As all the nations of Europe has been affected by the enterprises, so all were profoundly affected by his fall During that period boundaries were changed rapidly and refashioned therefore the defeat of Napoleonic regime must be followed by the reconstruction of Europe . The reconstruction was foreshadowed by the treaties concluded with each other by each other as they entered the Great Coalition, particularly important were the Treaties of Paris and Vienna.
Treaty of Paris: On May 30th 1814 was concluded the Treaty of Paris between the Allies on the one hand and France under Louise XVIII on the other.
i. According to the treaty the boundary of France were to be those of January 1, 1792 with slight additions towards the southeast in Savoy and in the north and north east.
ii. On the other hand she was to relinquish all her conquest beyond that line, which meant the extensive territories of Netherlands, Italy, and parts of Germany, containing in all a population of about thirty two millions.
iii. The distribution of this territories was to be determined later , but it was already decided in principle and slated in the treaty,
iv. that the Netherlands should form a single state by the addition of the Belgian provinces to Holland , Lombardy and Venetia should go to Austria, Republic of Genoa should be incorporated in Sardinia, the states of Germany should be united in a federation, England should keep Malta and certain French colonies, returning others, German territories on the left bank of the Rhine , united to France since 1792 should be used for the enlargement of Holland and as compensation to Prussia and other German states, Italy were to go to Austria.
The definite elaboration of these intentions of the Allies was to be the work of a general international congress to be held later in the year in Vienna.

CONGRESS OF VIENNA (SEPT. 1814- JUNE 1815)
The congress of Vienna (September 1814- June 1815) was one of the most important diplomatic gatherings in the history of Europe, by reason of the number, variety and gravity of the questioned presented and settled. It was due to the recognition of the decisive part played by Austria and of the commanding personality of Metternich that Vienna was chosen as the scene of the international congress. There were the emperors of Austria and Russia, the kings of Prussia, Bavaria, Wurtermberg, Denmark, a multitude of lesser princes and all the diplomats of Europe of whom Metternich and Tallyrand were the most important. All the powers were were represented except Turkey. The Congress of Vienna was not a congress in the ordinary meaning of the word. There was never any former opening nor any general exchange of credentials. The signatories of the treaty of Chaumont would decide all

matters among themselves and then present their decision merely as perfunctory
ratification. But Tallyrand threatened to nullify the program of the “ Big Four”( Austria,
Prussia, Russia and great Britain) by invoking the treaty of Paris in favour of a full and free
congress of all the powers , which was backed by Spain, Portugal, Sweden and the lesser
powers.
A. Principle of Legitimacy and Compromise:
i. A ‘Final Act’ was signed in June 1815, embodying what is commonly called
the peace settlement of Vienna. Accordingly, the treaties of Vienna
recognised the restoration of the Bourbons in France, in Spain and in the two
Sicilies , of the House of Orange in Holland, of the House of Savoy in Sardinia
and Piedmont, of the Pope to his temporal possessions in central Italy and of
various German princes whose territories had been included in the
Confederation of the Rhine. Likewise , Austria recovered the Tyrol and other
lands of which it had been despoiled and the loose Swiss confederation was
restored under a guarantee of neutrality. Great Britain appropriated, along
with certain French and Spanish trading posts, the important Dutch colonies
of Ceylon and South Africa and a part of Guiana.
ii. To compensate the Dutch and to erect a stronger state on the northern
frontier of France, the southern( Austrian) Netherlands were joined with
northern( Dutch) Netherlands under the rule of the restored Dutch prince of
Orange, now recognised as the King of United Netherlands.
iii. To compensate Austria for the surrender of its claims on the southern
Netherlands, it was given a commanding position in Italy. The territories of
the historic republic of Venice( including the Illyrian provinces along the
eastern coast of the Adriatic) and the duchy of Milan( Lombardy) were
transferred outright to the Habsburg Empire and members of the Habsburg
family were seated upon the thrones of the small central states of Tuscany,
Parma and Modena
iv. Sweden as compensation for the cession of Finland to Russia and of
Pomerania to Prussia, secured Norway from Denmark, whose protracted
alliance with napoleon merit a severe punishment
v. Prussia’s gained were significant, it recovered all the German territories of
which it had despoiled by Napoleon and in addition it acquired Swedish
Pomerania, two-fifths of Saxony, the whole of Westphalia and most of the
Rhineland. These cession were intended to make Prussia a bulwark against
France but in the long run they did more. They provided it with mineral
resources of the greatest economic importance during the ensuing century
and in conjunction with the surrender of” congress of Poland” to Russia, they
tend to transform Prussia from a half –slavic, thoroughly agricultural state
into the leading industrial state of Germany.
3 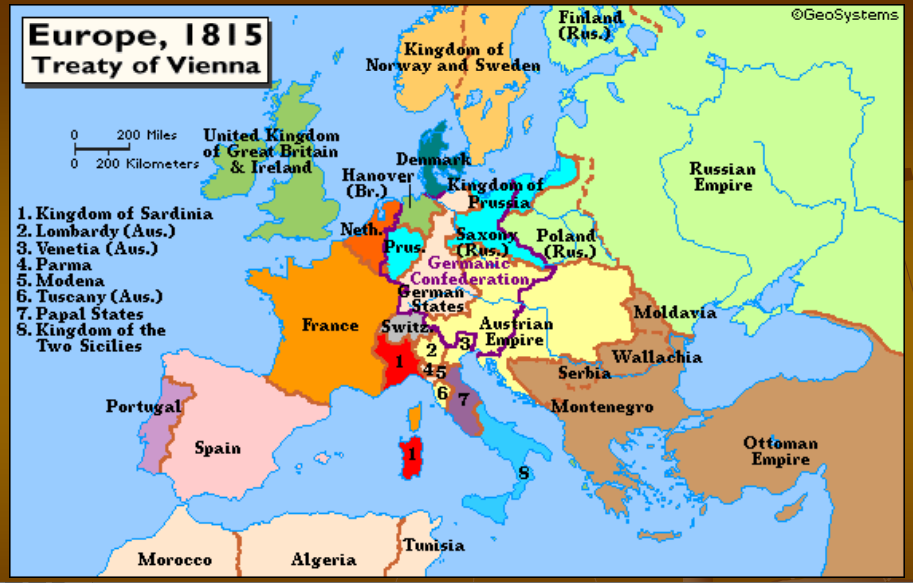